Deal activity by exchange listed companies inched up slowly in Q3 with announced deals for the quarter at R56,69 billion, up from R34,31 billion in Q2, but down on the usually quiet first quarter deal value of R95,08 billion. For the year to end September 2020, 261 deals were announced with a total value of R188,77 billion. The largest, deal by value, during the period is the disposal of Aspen Pharmacare to Mylan Ireland of its commercialisation rights relating to the thrombosis business in Europe valued at R12,69 billion. The largest BEE deal, AB InBev's SAB Zenele Kabili scheme, the shares of which are yet to list, is valued at R5,4 billion.

On the general corporate finance side, corporate restructurings and unbundling of assets took centre stage, with PSG of Capitec Bank and RMB Holdings of its stake in FirstRand. Although there were 11 listings recorded, all but two of these were on alternative exchanges, and most of which were secondary listings on A2X, with only Ninety One ltd and Ninety One plc listing on the main bourse - a far cry from the 23 new listings recorded in 2017. Little wonder then that the JSE is to approach regulators about listing instruments across a range of currencies, in a bid to make the exchange more investment-friendly and attractive to multinationals.

Private equity activity, particularly in the South African unlisted space, has gained momentum during the course of the year, adapting well to the new circumstance brought about by COVID-19, with 85 deals announced/signed during the year to end September, up on the 70 deals recorded by DealMakers during the period in 2019 and 55 in 2018. The industry is best placed to capitalise on investment opportunities during downturns and given the extent of dry powder available, these numbers are likely to increase in the coming years particularly as government and the private sector seek to boost economic growth through infrastructure.

Listed companies face an interesting dilemma when considering the implementation of BEE deals. Due to the way these deals are often structured - typically BEE participants do not have the funding, so deals are third party-funded with company shares providing the necessary security and participants relying on dividend cash flows to pay outstanding debt and interest payments. Established BEE deals have been poorly affected by the pandemic, though to be fair, the weakness in the SA economy cannot be placed squarely on the shoulders of the lockdown - for some time political noise, regulatory uncertainly, credit downgrades and investor jitters have contributed to weaker share prices and a general lacklustre in the equity market. As a result a number of BEE deals are now underwater. However, the flip side to this argument is that because of the undervalued price of many shares, an opportunity exists to improve the BEE scorecard, providing an opportunity to create value at these lower price levels.

As lockdown eases, there are renewed signs that deal activity is coming back to life again, albeit a fragile recovery. While it will take quite some time to regain ground lost as a result of the pandemic, there are deals in the pipeline as companies take advantage of opportunities presented. However, these deals are highly industry and deal specific and a successful close in this current environment will depend on the ability to agree on the value, assisted by innovative structuring, access to funding and the ability to navigate regulatory hurdles.

M&A Analysis by DealMakers of M&A activity in South Africa for the period Q1-Q3 2020. 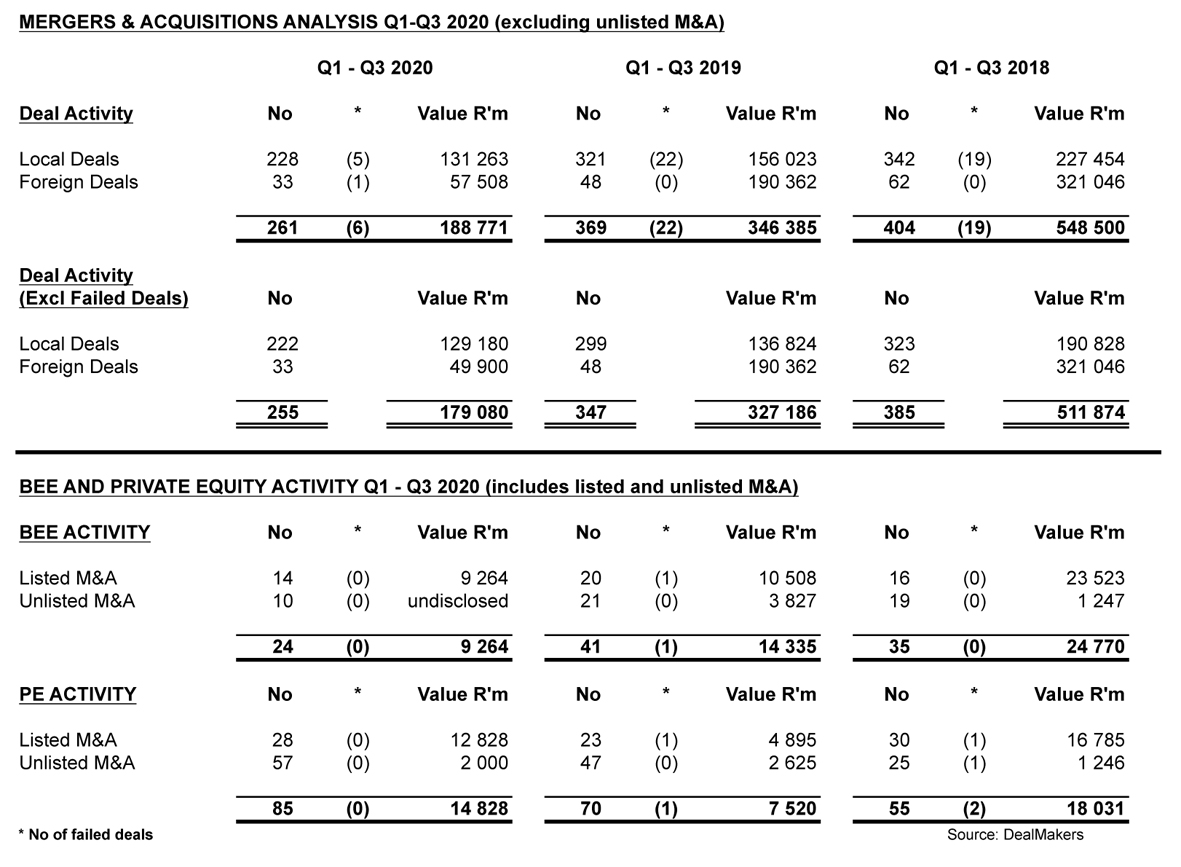 Analysis and rankings (below) by DealMakers of M&A activity by the top South African advisory firms (in relation to exchange-listed companies) for Q1-Q3 2020. 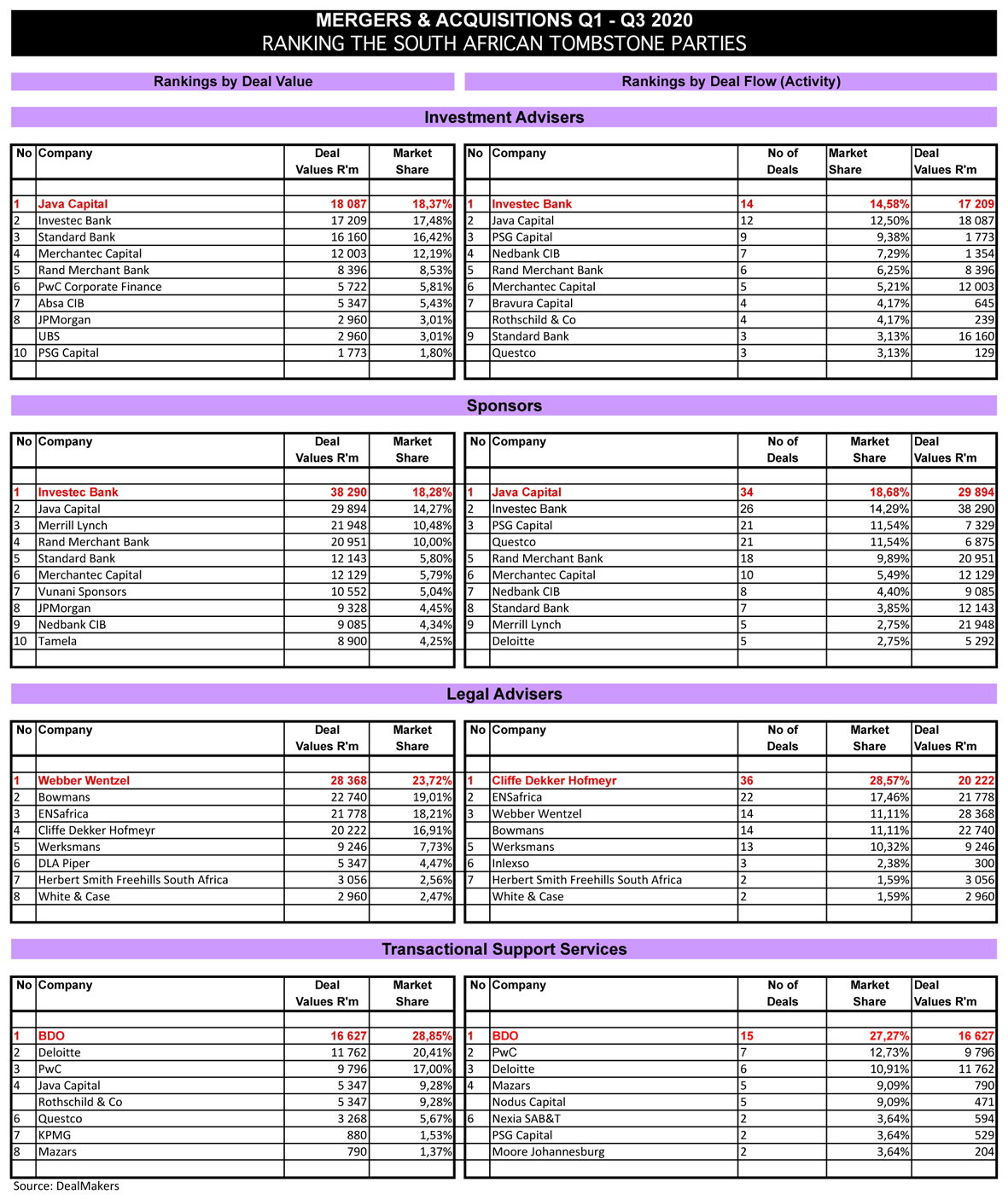 Advisory firms ranking in activities of general corporate finance for Q1-Q3 2020 are as follows: 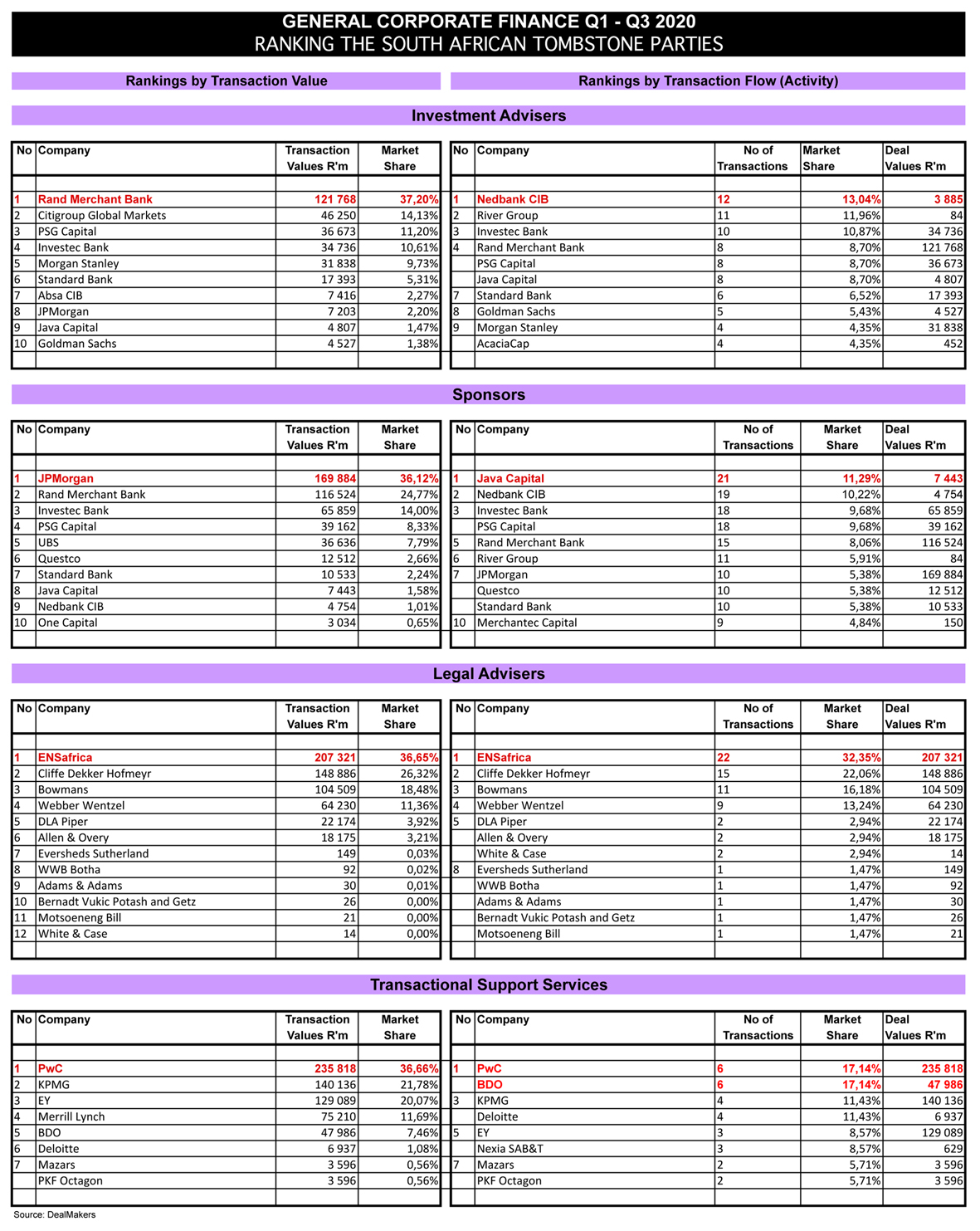 Brasher will be replaced by Pieter Boone, who was identified in a global search that included internal candidates.