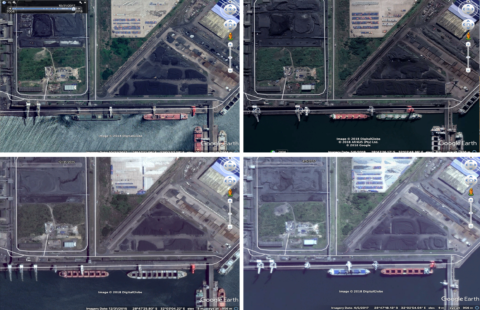 A message circulating like wildfire on social media claims that Chinese ships are currently waiting to be loaded with millions of tons of coal in Richard's Bay. This message says this casts doubt on Eskom's alleged narrative that a shortfall of decent coal is contributing to the need for load shedding. It is further claimed that all flying has suddenly been restricted over Richard's Bay. We investigated.

"7.2 million tons of coal destined for China from Richard's Bay Harbour," claims a message doing the rounds on social media.

"36 Chinese ships are waiting for coal to be loaded in Richard's Bay Harbour. Where is the shortage now, Eskom?"

It claims that Eskom has "huge stockpiles of coal", but the parastatal is concealing this "because they want that 15% increase in electricity tariffs".

As a post-script, it adds: "All flying is suddenly 'restricted' over Richard's Bay - the reason is obvious! This is not just an Eskom deal - it's an ANC deal/ploy!"

We'll start with the final claim, which is the most straightforward to check.

Is flying restricted over Richard's Bay? Answer: No

It is possible to search no-fly zones internationally on the US government's Federal Aviation Administration website, which - a defence source informed Daily Maverick - keeps accurate and up-to-date records of even South Africa's air space.

The website lists all "NOTAMs" - notices to all aviators - affecting the air space above Richard's Bay. As can be seen from the results, the only notices relate to temporary warnings due to planes missing their landing approaches, and none is recent.

The Richard's Bay Coal Terminal (RBCT) bills itself on its website as "one of the leading coal export terminals in the world", boasting "an advanced 24-hour operation with a design capacity of 91 million tons per annum".

Satellite imagery downloaded by Daily Maverick from Google Earth shows coal being moved out of RBCT on a frequent basis over the past few years - so there is nothing new or sudden about this development. Its website states that the terminal receives "approximately 700 vessels" per year.

In 2017, the RBCT's website records, it exported over 70 million tons of coal from South Africa to other countries.

Contacted by Daily Maverick for clarity, RBCT's corporate affairs manager Melinda Forbay responded: "RBCT is not an exporter. We are a logistics facility on behalf of exporting parties. In terms of understanding market destinations, we refer you to the exporting parties which are listed on our website."

The coal miners which use RBCT to export coal include Anglo-American, African Rainbow Minerals, Glencore, the Gupta-owned Optimum/Tegeta operations, and Sasol.

According to figures obtained by Daily Maverick from the Department of Mineral Resources, China is not one of South Africa's major export markets for coal.

The leading importer of South African coal is India, with the country importing 44.63% of South Africa's total coal exports in 2017. It is followed by Pakistan, at 10.56%, and South Korea, at 9.23%. Other reasonably big importers include Italy and the Netherlands.

The Chamber of Mines' National Coal Strategy for 2018 states that coal exports account for about 28% of total sales of South African-mined coal annually.

The reason why mining companies would be keen on exporting is simple: the export price for coal is substantially higher than what they can get for it domestically.

The Chamber of Mines notes: "The domestic price of coal is mainly determined by Eskom and historically it has always been lower than the export price."

There's one obvious point here which perhaps is worth noting: much to Julius Malema and the EFF's chagrin, mining houses are not controlled by the government. In other words, there is no prohibition on mining houses selling coal wherever they want.

Department of Mineral Resources spokesperson Ayanda Shezi confirmed to Daily Maverick: "The DMR does not stipulate which export markets should be targeted."

International demand for coal has been dropping in recent years, however, due to increased awareness of environmental concerns and attempts to lower national carbon emissions.

Is the current load shedding crisis linked to exports of coal? Answer: No

"Due to inadequate or deferred maintenance, some of the generating units have broken down, resulting in a constrained power system which at times leads to the implementation of load shedding."

Phasiwe added: "It is also worth mentioning that although Eskom has low coal stockpiles at 10 coal-fired power stations, that shortfall is not the reason for the load shedding we have experienced in the past few days."

City Press has a useful piece explaining the multiple complicated (and often enraging) causes of the load shedding that South Africa is experiencing at the moment.

Conclusion: No, Richard's Bay coal exports are not the cause of SA's current power crisis

There is nothing sinister or sudden about the movement of coal out of Richard's Bay, which happens year-round. Neither are mining houses prohibited from exporting coal from South Africa, which they do at some volume due to the higher price they can obtain for coal internationally. DM