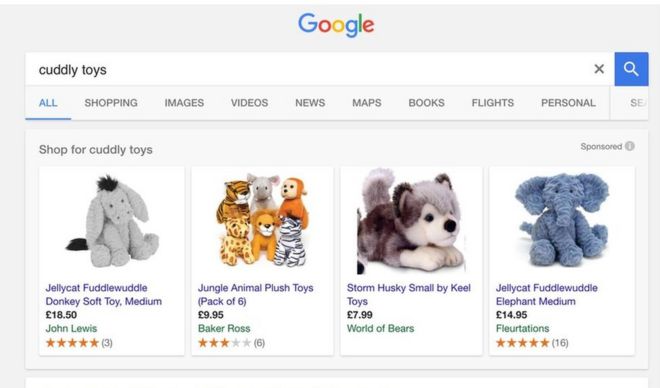 Google has been fined 2.42bn euros ($2.7bn; £2.1bn) by the European Commission after it ruled the company had abused its power by promoting its own shopping comparison service at the top of search results.

The amount is the regulator's largest penalty to date against a company accused of distorting the market.

The ruling also orders Google to end its anti-competitive practices within 90 days or face a further penalty.

The US firm said it may appeal.

However, if it fails to change the way it operates the Shopping service within the three-month deadline, it could be forced to make payments of 5% of its parent company Alphabet's average daily worldwide earnings.

Based on the company's most recent financial report, that amounts to about $14m a day.

The commission said it was leaving it to Google to determine what alterations should be made to its Shopping service rather than specifying a remedy.

"It has denied other companies the chance to compete on their merits and to innovate, and most importantly it has denied European consumers the benefits of competition, genuine choice and innovation."

Ms Vestager added that the decision could now set a precedent that determines how she handles related complaints about the prominence Google gives to its own maps, flight price results and local business listings within its search tools.

Google had previously suggested that Amazon and eBay have more influence over the public's spending habits and has again said it does not accept the claims made against it.

"When you shop online, you want to find the products you're looking for quickly and easily," a spokesman said in response to the ruling.

"And advertisers want to promote those same products. That's why Google shows shopping ads, connecting our users with thousands of advertisers, large and small, in ways that are useful for both.

"We respectfully disagree with the conclusions announced today. We will review the Commission's decision in detail as we consider an appeal, and we look forward to continuing to make our case."

Google Shopping displays relevant products' images and prices alongside the names of shops they are available from and review scores, if available.

The details are labelled as being "sponsored", reflecting the fact that, unlike normal search results, they only include items that sellers have paid to appear.

On smartphones, the facility typically dominates "above-the-fold" content, meaning users might not see any traditional links unless they scroll down.

Google also benefits from the fact the Shopping service adverts are more visual than its text-based ads.

One recent study suggested Shopping accounts for 74% of all retail-related ads clicked on within Google Search results. However, the BBC understands Google's own data indicates the true figure is smaller.

The European Commission has been investigating Google Shopping since late 2010.

The probe was spurred on by complaints from Microsoft, among others.

The rival tech giant has opted not to comment on the ruling, after the two struck a deal last year to try to avoid such legal battles in the future.

However, one of the other original complainants - the British price comparison service Foundem - welcomed the announcement.

"For well over a decade, Google's search engine has played a decisive role in determining what most of us read, use and purchase online. Left unchecked, there are few limits to this gatekeeper power."

This is a big moment in a clash between the EU and the US's tech giants, which has been going on for more than a decade.

The commission believes it has struck a blow for consumers and for little firms at a time when online advertising - particularly on mobile phones - is dominated by Google and Facebook.

Google believes the regulator has a weak case and has failed to provide evidence that either consumers or rivals have been harmed.

In essence, it sees this as a political move rather than one based on competition law. You can be pretty confident that the Trump administration will share that view.

There's mounting anxiety in European capitals about something called Gafa - Google, Apple, Facebook and Amazon - the four American giants that play such a huge role in all of our lives.

That means we can expect further action to try to limit their powers, with the potential for growing political tension between Brussels and Washington.

Although the penalty is record-sized, it could have been bigger.

The commission has the power to fine Alphabet up to 10% of its annual revenue, which was more than $90bn (£70.8bn) in its last financial year.

Alphabet can afford the fine - it currently has more than $172bn of assets.

But one expert said the company would be more concerned about the impact on its future operations.

"If it has to change the appearance of it results and rankings, that's going to have an impact on how it can monetise search," said Chris Green, from the tech consultancy Lewis.

"Right now, the way that Google prioritises some of its retail and commercial services generates quite a lot of ad income.

"When you consider the sheer number of search queries that Google handles on a daily basis, that's a lot of ad inventory going in front of a lot of eyeballs.

"Dent that by even a few percentage points, and there's quite a big financial drop."

At her press conference, Margrethe Vestager insisted her action was "based on facts" rather than any prejudice the European Commission might have against US tech companies.

"We have heard allegations of being biased against US companies," she said.

"I have been going through the statistics... I can find no facts to support any kind of bias."

But this is far from the first time the European Commission has penalised US tech giants for what it views to be bad behaviour.

Others to have been targeted include:

The commission is also investigating Amazon over concerns that a tax deal struck with Luxembourg gave it an unfair advantage.

The first involves allegations that the technology company has made it difficult for others to have their apps and search engines preinstalled on Android devices.

The second covers claims Google took steps to restrict rivals' ads from appearing on third-party websites that had installed a Google-powered search box.