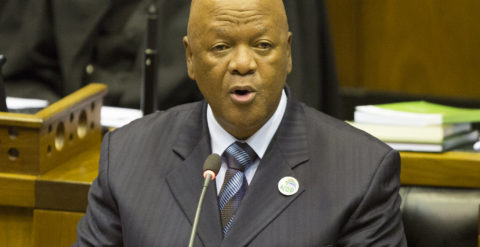 Independent reports are being received by EE Publishers that energy minister Jeff Radebe has asked the Necsa board to provide reasons why it should not be removed, and that issues relating to the Necsa chairman are central to this matter.

It appears that the issues raised by the minister with the Necsa board concern matters of governance, engagements with Russian nuclear interests and possible unauthorised research reactor deals with Russia's Rusatom, overseas trips by the Necsa chairman, unauthorised media releases, articles and/or communications, and apparent conflicts of interest.

Formal questions have been put to Minister Radebe, to Necsa chairman Dr Kelvin Kemm and to Necsa CEO Phumzile Tshelane, including a request for confirmation as to whether the reports being received are correct or not, and/or whether there is any substance to these reports, to which Necsa has replied:

Necsa is the Nuclear Energy Corporation of South Africa, a state-owned enterprise undertaking R&D and commercial activities in the field of nuclear energy and radiation sciences, and the production of medical nuclear radioisotopes and associated services. Necsa is also responsible for processing source material, including uranium enrichment, and co-operating with other institutions, locally and abroad, on nuclear and related matters.

Over the last few years, Necsa has been embroiled in a number of debilitating operational, financial and governance challenges.

As a result of safety procedure lapses, Necsa's NTP Radioisotopes plant, which produced a significant share of the world's commercial medical nuclear radioisotope, Molybdenum-99, was shut down by South Africa's National Nuclear Regulator (NNR) in November 2017, which lasted almost a full year.

Several attempts to restart the NTP plant were undertaken during the leadership of Thabo Tselane, a Necsa appointed NTP board member, who according to media reports took over as interim group MD from Tina Eboka when she and four NTP executives were suspended. Up until July 2018, these attempts by Tselane appear to have failed.

Since July, when the senior executives, including Eboka, were reinstated after a nearly seven-month period of suspension, the process of rectifying shortcomings and bringing the operating and safety procedures in line with the requirements of the NNR seemed to have been marred by what appeared to be conflict between the boards and management of NTP Radioisotopes and its parent company, Necsa.

The problem was finally resolved after energy minister Jeff Radebe appointed deputy energy minister Thembisile Majola to assume full oversight of the board of NTP Radioisotopes from Necsa, which enabled more efficient communication between NTP, Necsa and the NNR.

It was announced in mid-November that the NTP Radioisotopes plant was back in operation after conditional approval to restart was given by South Africa's National Nuclear Regulator (NNR).

NTP Radioisotopes normally has a revenue of about R1,3-billion a year, providing a contribution of more than 50% to the revenue of the Necsa group. The closure of the NTP production plant for a year has therefore obviously had a devastating financial impact.

There are also wider concerns regarding the financial health of Necsa. The Auditor-General has raised ongoing concerns about inadequate financial provisions by Necsa for decommissioning and dismantling costs at the end-of-life of Necsa's SAFARI-1 research reactor.

As a result, Necsa's annual financial statements for the year ending 31 March 2018, which were due to be published by end September 2018, have still not been tabled. DM

Note: This article will be updated as further information comes to hand, and/or a response from energy minister Jeff Radebe is received.