One of Africa's best kept secrets - its history

One of Africa's best kept secrets - its history

Africa has a rich and complex history but there is widespread ignorance of this heritage. A celebrated British historian once said there was only the history of Europeans in Africa. Zeinab Badawi has been asking what is behind this lack of knowledge and looking at the historical record for an African history series on BBC World News.

The Great Pyramid of Giza in Cairo is rightly considered one of the seven wonders of the ancient world. But travel further south along the River Nile and you will find a thousand pyramids that belonged to the Kingdom of Kush, in what is now Sudan.

Kush was an African superpower and its influence extended to what is now called the Middle East.

The kingdom lasted for many hundreds of years and in the eighth Century BC, it conquered Egypt and governed for the best part of a century.

What remains of the kingdom is equally impressive. More than 300 of these pyramids are still intact, almost untouched since they were built nearly 3,000 years ago.

Some of the best examples can be found in Jebel Barkal in northern Sudan, declared a world heritage site by the UN's cultural agency, Unesco.

Here you can find pyramids, tombs, temples and burial chambers complete with painted scenes and writings that Unesco describes as masterpieces "of creative genius demonstrating the artistic, social, political and religious values of a human group for more than 2,000 years". 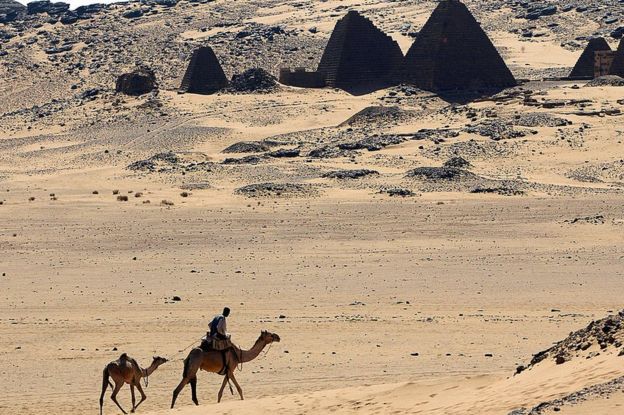 Some years ago I visited these pyramids. On my return to the UK, I asked my parents what they knew of their country's historic sites. Not much, it turned out.

This was odd since both of them could tell you a lot about Henry VIII and key points in British history.

I wondered given that my parents did not know enough about their own country's history whether this was likely to be true of many other Africans.

And as I talked to people I discovered that this was indeed the case.

A few years later, at Unesco's Paris headquarters, I saw on the bookshelves of Ethiopian-born Deputy Director-General Getachew Engida a collection of volumes - the General History of Africa.

This, it turned out, is one of Unesco's and the continent's best kept secrets: Africa's history written by African scholars.

The project was conceived in the early 1960s during the period of rapid decolonisation in Africa. Some of the newly independent African leaders decided that after decolonising their countries they also wanted to decolonise their history.

Western historians had lamented the lack of written records in some African countries and had used this as a reason to legitimise such neglect.

Unesco helped African scholars put together the project, recruiting 350 experts, mostly from across Africa and from a range of disciplines, to compile eight volumes, starting from prehistory and continuing to the modern era.

The eighth volume was completed in 1990 and a ninth is now being worked on.

Unesco took the controversial step of starting the volumes with the origins of humankind, setting out the theory of evolution. By doing so, they risked incurring the wrath of Christian and Muslim communities in some African countries where there was, and still is, a widespread belief in creationism.

Kenyan palaeontologist Richard Leakey, who contributed to volume one, says he still believes that the fact humans originated in Africa is anathema to some Westerners, who would prefer to deny their African origins.

The story of the Kingdom of Kush, a superpower in western Asia as well as Africa, where queens could rule in their own right, is also often overlooked.

This is also true of the Kingdom of Aksum, described as one of the four greatest civilisations of the ancient world.

The Aksumite kings controlled trade in the Red Sea from their base in what is modern day Eritrea and Ethiopia. They were also the first rulers in Africa to embrace Christianity and make it the kingdom's official religion.

This history is little known, both in Africa and elsewhere, because a lot of academics and teachers in African countries have been a product of colonial education themselves, and so they could not receive a comprehensive and chronological account of their own history.

My own Sudanese parents were fluent in English, and highly educated, but by and large were taught according to a Western curriculum.

Even when they looked at their own history, it would have been through the perspective of Western scholars.

One such view was reflected in the comments by Hugh Trevor-Roper, widely regarded as one of Britain's foremost historians.

He said in 1965: "Perhaps, in the future, there will be some African history to teach. But at present there is none, or very little: there is only the history of the Europeans in Africa.

"The rest is largely darkness, like the history of pre-European, pre-Columbian America. And darkness is not a subject for history."

The fact that very few people know about the volumes compiled under the auspices of Unesco also tells you something. You wonder why leaders did not want to shine more light on it.

I am not suggesting there was a conspiracy, of course. Just that there was not enough emphasis placed on African history by either African or non-African leaders.

This is of particular interest for Africa, though, because it has been infantilised to a degree that we have not seen in any other region of the world.

This is partly because there has been a way of seeing Africa in terms of poverty and conflict - the coup, the war, the famine, the corruption - which has become a kind of shorthand for the continent that still persists today.

Although this is done with the best will in the world it has nevertheless fed into this representation of Africa, whereby it is assumed that, in order for its people to develop and for them to have enough to eat, they have to rely on outsiders.

As someone who was born in Africa, and who came to the UK as an infant, I have the benefit of understanding both cultures.

The General History of Africa is a start and Unesco plans to incorporate its research into school syllabuses across the continent.

Hopefully, future generations will have a better idea of their history and see there is much for them to be proud of from their past . A past which provides the foundation for an even greater future.

The casual dining restaurant group may impair the full value of its investment in Gourmet Burger Kitchen due to the open-ended lockdown.

The technology group says it will start to lay the groundwork now and will assess market conditions for a listing closer to the time.

The food group says retail channels have picked up but sales to restaurants, cafes and bars have dried up.

The poultry producer says rising volumes were not enough to offset the impact of lower egg prices and higher feed production costs.

ARM to resume some operations

Due to exemptions for goods critical to the economy, the group can continue loading iron ore at two of its mines in the Northern Cape.