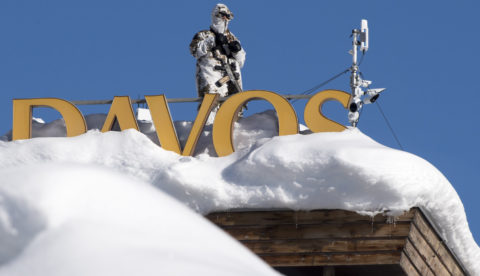 At the 2019 World Economic Forum in Davos this week, there are several sessions on Africa and the developing world in general where this report is going to be the centre of discussion. Our own President Cyril Ramaphosa and other heads of state will headline some of those discussions, but the continent's response to these risks goes beyond WEF, into the policy boardrooms and forums of the African continent itself.

The World Economic Forum recently released its 2018 Regional Risks for Doing Business Report, identifying five risks for the African continent. These are unemployment/underemployment, failures of national governance, energy price shocks, failure of critical infrastructure and fiscal crises. I am certain that some or all of these resonate regardless of the region or country in which one resides on the African continent.

As if to illustrate the point, as I write this we are seeing sustained protests in Zimbabwe over significant fuel price increases that evidently make it difficult for ordinary people and businesses to cope with daily living and operational expenses. Zimbabwe's fiscal challenges mean it does not have the capacity to provide the cushions that would lessen the financial burden on consumers, and so it has to find a point of equilibrium without worsening the state of its government finances.


The other risks are important, too, in particular, national governance and infrastructure without which it is difficult to build a strong economy. Every state needs laws that are fair, where compliance therewith is generally adhered to and where a fair and transparent judicial system adjudicates over commercial and other disputes. It also needs regulators who are fair in the formulation and implementation of rules of conduct.

This can be hard in environments where the democratic cultures are not strong, political interference is common and professional services expertise is not readily available. These are all challenges that ultimately affect economic investment and development, and have to be tackled head-on if these risks are to be successfully mitigated.


At the 2019 World Economic Forum in Davos this week (WEF 2019), there are several sessions on Africa and the developing world in general where this report is going to be the centre of discussion. Our own President Cyril Ramaphosa and other heads of state will headline some of those discussions, but the continent's response to these risks goes beyond WEF, into the policy boardrooms and forums of the African continent itself.

Given the historical narrative of the African continent, in which risks and destruction exceed opportunity, it is easy to see these same risks as insurmountable. I beg to differ, however. Here is why.

Africa brims with potential with a young population and decades of productive life ahead of it. The continent has an abundance of natural resources and wealth. At both AU and individual countries, a lot of work continues to be done to improve political stability, drive regional co-operation and modernise national policies to enable investment.

In March 2018, the African Union adopted the Agreement Establishing the African Continental Free Trade Area (AfCFTA), which by November 2018 had been adopted by 55 member countries. Once entered into force, it will become the largest free trade area in the world and is a flagship project of the African Union's Agenda 2063. The AfCFTA aims to build an integrated market of over 1 billion people, with a combined GDP of over $3-trillion.


At this year's WEF, Absa will launch the Absa Africa Financial Markets Index 2018. The aim of the Index, the second since 2017, is to establish a benchmark for the investment community to gauge African countries' performance and highlight how they can learn from others. It is used by investors to gauge countries' performance across six pillars that include market depth, access to foreign exchange, market transparency, tax and regulatory environment and the enforceability and legality of financial market master agreements.

The Index does not only help investors understand where to invest and what risks they have to manage, but it also helps each country to better understand areas where they need to improve to attract foreign direct investment.

At the individual country level there continue to be pleasing developments. For instance, fast-growing Ethiopia is experiencing an encouraging transition that promises to deepen democracy and bring lasting peace. In April 2018, 42-year-old Abiy Ahmed became one of Africa's youngest leaders when he was selected by the governing EPRDF as Prime Minister, following the resignation of Hailemariam Desalegn.

This is not to say there are no reversals in other countries and regions, but it is very important that at global gatherings such as the WEF, and in our own discourse on the continent, we recognise and encourage progress where we see it. There is much more we need to do, however.

First, the strengthening of governance systems is inseparable from the deepening of democracy and its supporting institutions, such as the judiciary, free and fair elections and truly representative parliaments. This is so ordinary Africans can have confidence in the decisions, some of which may be difficult to swallow, that their governments have to take in pursuit of long-term development.

We also need an independent and mature news media to support democratic institutions by providing a channel for communicating critical information so that ordinary citizens can hold the powerful to account, be they politicians or representatives of private interests.

The second imperative involves making education reform and training modernization a continental priority. The theme of this year's WEF revolves around the Fourth Industrial Revolution (4IR), a development that will have an impact on Africa's ability to compete. African children do not have access to the same early learning and secondary school resources that their peers in developed countries have, and this has significant implications for the continent's ability to compete in a digital future.

This means we have to change the way we think about the outcomes of our education systems, how national curricula are formulated and the distribution of state funds for education. We have to impart new skills that prepare African children for a digital future.

Since many governments do not have large financial resources from which to invest in education, it is equally important that partnerships for development with global and large local private companies involve systematic investment in the digitisation of learning.

Over the last three years, we have partnered with South African education authorities to launch a Girls in Technology programme - where we mentor, teach coding and expose young learners to our tech experts to encourage them to pursue technology-related careers. Since we launched the program in 2015, almost 200 young learners have completed the program.

In addition, we have run an initiative we call We Think Code that gives students exposure to software engineering through two years of workplace experience. We offer the best performers permanent employment.

Thirdly, we need to work harder at providing more and better opportunities for women in this revolution. In addition to gender equality imperative, it also makes no sense to exclude a significant portion of the population when we need to utilise all the talent we have on our continent.

A specific challenge for continental financial institutions like Absa is to act as facilitating agents for further African development, helping partnerships between sovereign and private sector players.

While we by no means claim to represent Africa at this year's WEF, we are proud of our African roots and will always speak highly of its enormous possibilities. DM

The retail group says it will post an interim headline loss but is well positioned for any economic recovery.

Massmart counts the cost of Covid-19

The retailer and wholesaler lost billions of rand in sales due to restrictions during the lockdown.

The shopping centre owner says the restrictions have been imposed for an initial two weeks when the situation will be reassessed.

Initial jobless claims in the US fell more than expected last week.

Cover pushes Finbond into a loss

The mutual bank and microlender says increased business activity is needed to support an economic recovery.

Stenprop on track with portfolio conversion

The group says demand for its multi-let industrial properties continues as it reduces vacancies.