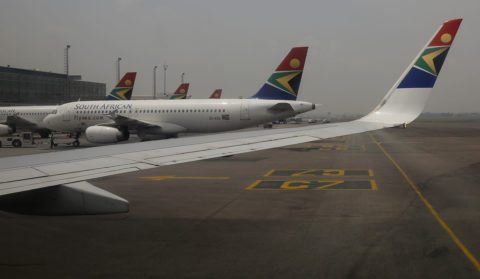 South African Airways's suppliers are slashing payment periods to reduce the risk of losing out from a collapse of the troubled state carrier, which is struggling to pay lenders 5 billion rand ($361 million) due by the end of this month.

Companies with contracts with SAA are cutting settlement terms to seven days from 21 days as the creditor deadline looms, interim Chief Financial Officer Deon Fredericks said in an interview in Cape Town. The National Treasury is working to facilitate the payment, with the process "well under way," he said.

"The problem with turning SAA around is that the board has to continuously focus on the funding issues rather than getting on with the operational plan," said Fredericks, who started a 12-month secondment from landline company Telkom SA SOC Ltd. last month.

SAA is one of several state-owned companies in financial distress following years of mismanagement and corruption scandals while Jacob Zuma was president. The carrier last made a profit in 2011, and has been relying on government support to stay in operation. Fredericks was brought in to work with Chief Executive Officer Vuyani Jarana while the airline seeks a permanent successor to ex-CFO Phumeza Nhantsi, who was fired for misconduct in June.
Cash Shortfall
If the 5 billion-rand payment is made, SAA will then have to find 9.2 billion rand of short-term loans due by the end of March. While the Treasury allocated 5 billion rand to SAA in last month's mid-term budget to repay debt, the Johannesburg-based carrier has been told it's responsible for any future restructuring. SAA is also facing a 3.5 billion-rand cash shortfall by the end of March, according to a presentation to lawmakers.

"The banks are not as friendly as they used to be," Public Enterprises Minister Pravin Gordhan told lawmakers in Cape Town on Tuesday. "They not only want the government guarantee, but they want to know the plan to turn SAA around and if there are the skills to do so." DM

The shopping centre owner says its focus on lower-LSM markets in non-metropolitan areas shielded it from the worst of the lockdown.

The fund is in a stronger position after selling Belgian properties and an interest in its Pan-European logistics portfolio.

The property fund says it will take advantage of a two-month extension before deciding on its final payout for the past year.

Ingham Analytics have published their latest thinking on the gold market.

The investment group says the pandemic eroded all the gains it achieved in the first half of the year.

The pharmaceuticals group says its management agreement with Ukusekela is already bearing fruit.

The pharmaceuticals group says its management agreement with Ukusekela is already bearing fruit.

The investment group says the pandemic eroded all the gains it achieved in the first half of the year.

Ingham Analytics have published their latest thinking on the gold market.