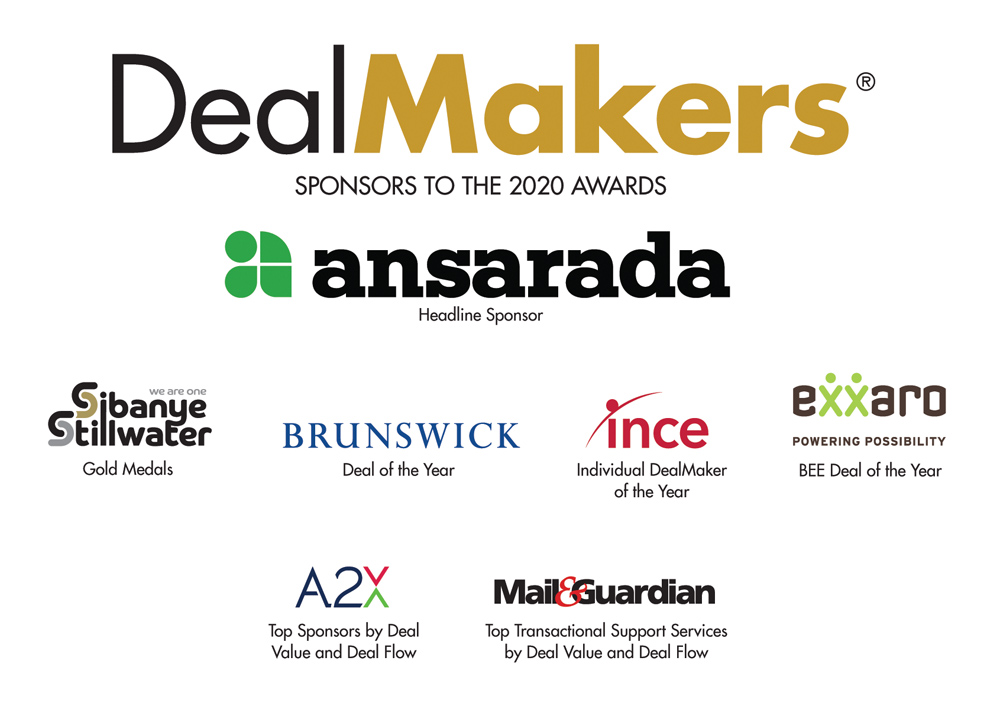 Comair entered voluntary business rescue proceedings in May 2020 in order to safeguard the company and its shareholders by restructuring the airline as quickly as possible so the business could once again be operational. The internal restructuring process begun in March but was interrupted by the grounding of flights in line with the COVID-19 travel restrictions. Comair become financially distressed and unable to meet debt obligations resulting in the company filing for business rescue. The evaluation of multiple bids, negotiations with lenders, aircraft lessors, creditors and stakeholders resulted in a transaction with the Moritz Consortium enabling Comair to resume trading operations in December 2020.

In 2019 Edcon, which had been struggling for a number of years under a growing debt burden secured R2,7 billion from lenders, landlords and the Public Investment Corporation in a restructuring plan that freed the company of interest-bearing debt. In May 2020 after losing R2 billion in sales as a result of SA's COVID-19 lockdown restrictions the owner of the Edgars and Jet chains filed for administration. Unable to find investors for the business, the administrators opted for a sale plan to transfer ownership of parts of the group in SA and Southern Africa and to save jobs. Durban-based Retailability backed by Metier Private Equity and DEG of Germany acquired 120 Edgars stores and The Foschini Group took over 425 Jet stores.

The company entered business rescue proceedings in May 2020 after deciding against voluntary liquidation. Phumelela was experiencing financial difficulties prior to the pandemic but it was the devastating financial impact of COVID-19 which led to its decision to enter business rescue proceedings. Phumelela received R100 million in post-commencement finance from local company Mary Oppenheimer Daughters (MOD), to ensure the continuation of operations while the company underwent restructuring and the sale of assets. Bids to acquire all or some of its assets were received from among others UK bookmaker Betfred and MOD. In September creditors voted in favour of MOD (4Racing) to take control of the racing assets including the local and offshore totes and broadcasting rights.

The local advisers were: RS Advisory, Werksmans and Fluxmans

Sasol disposal of a 50% stake in Lake Charles Chemicals Project

The $2 billion (R33 billion) joint venture deal was part of Sasol's plan to reduce debt, improve debt covenant compliance and enhance liquidity after a series of cost overruns and delays at its Lake Charles chemicals project were exacerbated by the collapse in the oil price and a global economic slowdown as a result of the COVID-19 pandemic. The deal cuts debt to $8 billion from $10 billion, gives the company an opportunity to stay in while shifting its portfolio toward specialty chemicals and increases its focus on an area where the company enjoys differentiated capabilities and strong market positions.

The local advisers to the deal were: Merrill Lynch, ENSafrica, PwC, KPMG and Deloitte.

The Foschini Group's acquisition of JET

Edcon, the owner of value retailer JET filed for administration in May 2020 after losing R2 billion in sales as a result of SA's lockdown restrictions. The R480 million cash deal sees The Foschini Group (TFG) acquire 382 select stores across SA, Botswana, Lesotho, Namibia and Eswatini and take on 4,800 of its staff. The deal gives TFG a significant entry into an increasingly important value retail sector, at scale and at an attractive price which would have been costly and difficult to replicate organically.

The local advisers to the deal were: Rand Merchant Bank, UBS, ENSafrica, EY and Matuson Associates.

Tongaat Hulett's disposal of its starch division to Barloworld

The announced R5,35 billion February 2020 acquisition for Barloworld was in line with its focus to transform its investment portfolio to focus on Industrial Services and Consumer Foods as key verticals. However in May and again in August, as a result of the impact on company earnings of COVID-19 and the strict lockdown, Barloworld issued a MAC (Material Adverse Change) notice to Tongaat, increasing the complexity of the transaction. The final determination was that a MAC had not occurred and the deal was closed at the end of October. The disposal price was adjusted to R5,26 billion.

In April 2020, Altron announced it was looking to demerge Bytes UK and to separately list it on the LSE with a secondary listing on the JSE. The decision was made to unlock value for shareholders as the UK business was identified as being materially undervalued when compared with its UK peer group. A minimum listing value of c.R9.4 billion was put in place by management who was willing to call off the listing if it did not achieve the price target. The company listed in December with a market capitalisation of R16,3 billion.

The local advisers to the transaction were: Rand Merchant Bank, DLA Piper, KPMG, PwC and EY.

Actis' acquisition of Octotel and RSAWeb

In October 2020 Actis, via its Neoma Africa-manged fund, entered into a number of agreements to acquire a controlling interest in Octotel, a local fibre-to-the-home operator and a non-controlling interest in RSAWeb, an internet service provider. Caxton and CTP Publishers and Printers and the Pembani Remgro Infrastructure Fund have fully exit their respective positions in the two entities. The investment into this high growth Digital Infrastructure sector was valued at R2,3 billion.

Edcon was placed under business rescue in April 2020. The plan approved was for the sale of parts of the company including the Edgars business. Retailability, backed by Metier, saw the potential of the brand and took the opportunity to acquire a significant portion of the Edgars business in South Africa, Botswana, eSwatini, Lesotho and Namibia at a favourable price. The deal gives Retailability access to more of the middle to upper end of the mass market.

The local advisers to the deal were: Matuson Associates, Cliffe Dekker Hofmeyr and ENSafrica.

Acquisition of Peregrine by Capitalworks

The R4,2 billion offer to qualifying shareholders presented an option to elect to receive a cash consideration of R21 per share and/or a leveraged re-investment option through the subscription of shares in one of Capitalworks' buyout vehicles (InvestCo share consideration offer priced at R17.40 per offer share). The attractive structure of the offer resulted in approval from 99.9% of shareholders with the reinvestment election, which will see benefits from the support of Capitalworks as a key anchor shareholder, oversubscribed.

The local advisers to the deal were: One Capital, Java Capital, Cliffe Dekker Hofmeyr, Werksmans, Webber Wentzel, KPMG and Deloitte.

The deal was announced to strengthen its B-BBEE ownership and benefit all permanent South African-based employees. The deal will constitute 3% of the company's issued ordinary share capital resulting in c.44,9 million shares being acquired and held by the newly established Momentum Metropolitan iSabelo Trust. The scheme is intended to have a maximum duration of 15 years eligible for full settlement after 10 years with units allocated being subject to a maximum seven-year vesting period.

The local advisers to the deal were: Standard Bank, Webber Wentzel and EY.

In March 2020, Anheuser-Busch InBev (AB InBev), through its SAB subsidiary, concluded the partial unwind of SAB Zenzele, delivering R9,7 billion to its participants. An accelerated bookbuild offering 9,5 million AB InBev shares and priced at R7,6 billion was performed on behalf of participants electing to receive cash as part of the partial unwind. The deal initially offered participants the opportunity to reinvest a portion of their proceeds into SAB Zenzele Kabili, a new R5,4 billion BEE transaction. However, the onset of the COVID-19 pandemic resulted in this being postponed to 2021.

The local advisers to the deal were: ENSafrica and White & Case.

Cobus Human (One Capital) has been in corporate finance for over 22 years and in 2015 was the recipient of the Individual DealMaker award for 2014. During 2020 Cobus worked on a number of noteworthy transactions including the take private of Peregrine by Capitalworks, the hostile takeover defence in relation to Quantum Foods by Country Bird and the placement of domestic medium-term notes in respect of Northam during the onset of the COVID-19 pandemic.

Lydia Shadrach-Razzino (ENSafrica) has 20 years' experience and heads up the firm's Private Equity team and co-leads a large team in the Corporate Commercial department. During 2020 Lydia worked on several notable transactions - the acquisition of JET by The Foschini Group and the company's R3,95 billion capital raise and the unwind by Anheuser-Busch InBev of its BEE transaction SAB Zenzele, deals which have been shortlisted in the 2020 DealMakers category awards.

Anthony Knox (Merrill Lynch) has over 15 years of investment banking experience. Over the past three years Anthony has played an instrumental role in executing some of SA's highest profile deal, the most notable being Sasol's disposal of a 50% interest in its Lake Charles Chemicals Project, the disposal of a 34.4% stake in Alexander Forbes by Marsh & McLennan, Old Mutual's Managed Separation and as independent expert in the unbundling of FirstRand. 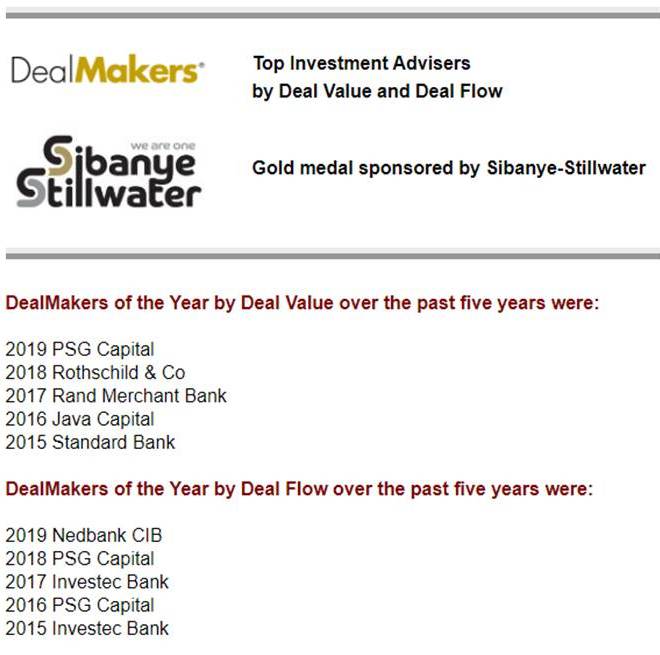 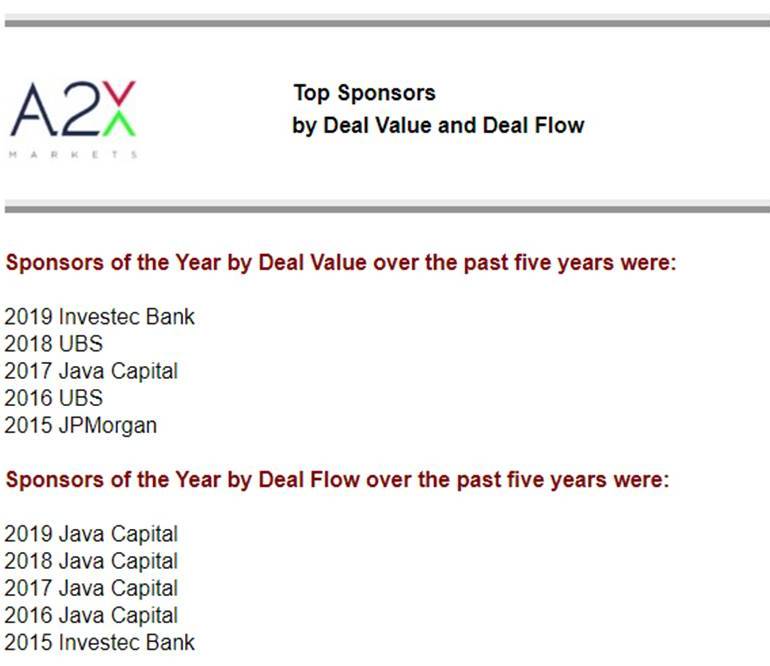 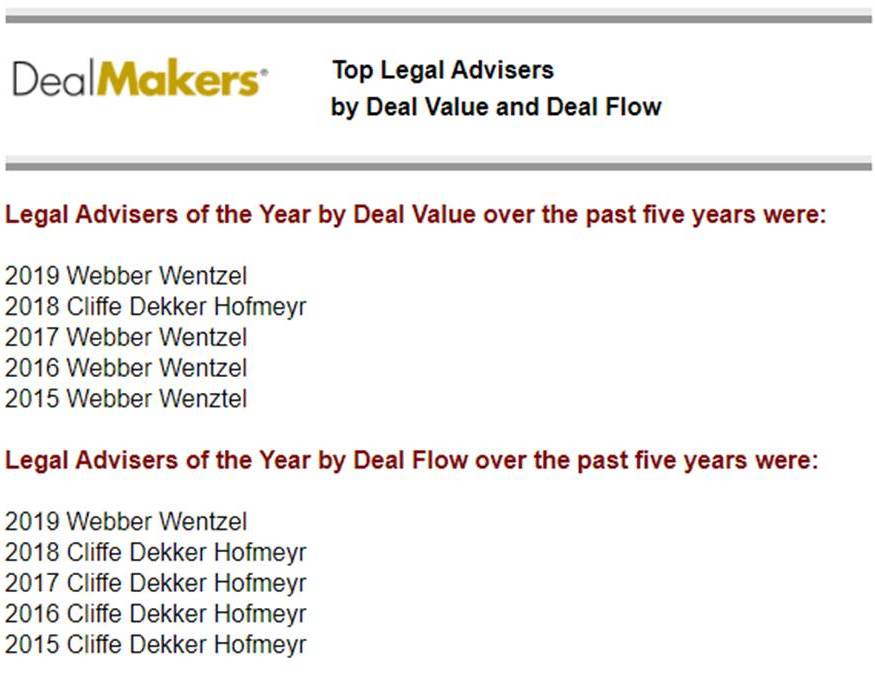 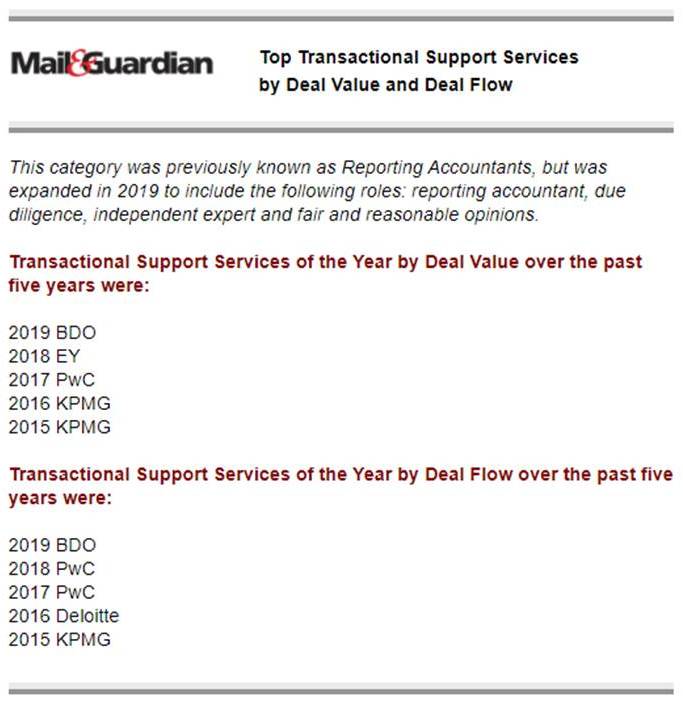 Liberty withholds dividend as it reports a loss

The insurance group has been impacted by a Covid-19 reserve fund and pressure on new business volumes as a result of the pandemic.

The insurance group has increased its provisions while claims have shot up due to Covid-19.

FirstRand bounces back with a dividend

The banking group says earnings have recovered faster than expected, driven by a better than anticipated rebound in the economy.

Due to Covid, there's a worrying contraction of savings in retirement funds.

The short-term insurer is not paying a final dividend after earnings tumbled as a result of Covid-19.