The new finance minister has no need to bother about a little blip in his past. But there are one or two others who might need to worry.
Immediately on the announcement of Enoch Godangwana as minister of finance, the google researchers began hitting their keyboards.
To their apparent delight, up popped mentions of an insolvent company called Canyon Springs. Godangwana had been a shareholder. As a director, there was a stinging phrase about him having acted "fraudulently or at least recklessly" over the R120m of clothing workers' pension money that had been invested in the company.
This was purportedly the "dark cloud" continuing to hang over the new minister. It's massively unfair on him. If anybody is to answer for the Canyon Springs disaster, it isn't Godongwana but the then head of the Financial Services Board.
At all material times the FSB was supposed to have supervised the activities of the Trilinear group companies which pulled over R400m of pension money into numerous duds. Canyon Springs was amongst them.
Central role of Tshidi
Throughout this period of fraught supervision, the FSB executive officer was Dube Tshidi. On subsequent conversion of the FSB to the Financial Sector Conduct Authority, Tshidi became and remained a member of the FSCA transitional management committee. Since the FSCA reports to the minister of finance, by a gentle twist of irony Godongwana is today in a strong position to request that Tshidi fills in a few gaps.
One of these would be to identify the FSCA officials still in place after they'd let Trilinear pass from under their noses. Another is to explain the ongoing secrecy with which the FSCA treats matters pertaining to Trilinear, the most recent being the confidentiality of the out-of-court settlement on the R70m claim by the PEP Limited provident fund (PEPF) for its losses on Trilinear.
The essence of the PEPF claim against the FSB and Tshidi was their alleged liability for the fund's losses by having failed to perform their statutory duties. Had the PEPF known what the FSB knew, when the FSB knew it, the fund could have responded to avoid the loss. However, the regulator had neither notified PEPF of Trilinear's illegal actions nor appointed a curator when it should have.
As far back as November 2007 the FSB had itself suspended Trilinear for having failed to submit financial statements. During its suspension, lifted in May 2008, Trilinear appeared nonetheless to continue investing clients' money (compounding huge losses) in blatant disregard of the suspension.
Merely a month after the suspension had been lifted, in June 2008 the FSB received a whistleblower's tip-off concerning Trilinear's management of SA Clothing & Textile Workers Union (Sactwu) funds and possible pay-offs to Trilinear officials. The whistleblower indicated that ridiculous fees had been paid to a company bearing Trilinears's name.
The FSB was also warned that Trilinear had invested the union money via loans in unlisted entities that were unable to repay the loans because of their poor financial position. Yet it took the FSB a full seven months, until January 2009, before it appointed inspectors to investigate.
The inspectors found (amongst other things) that Trilinear had written up and signed a loan agreement with Canyon Springs, a company associated with Godongwana who was then deputy minister of economic development. The purpose of the loan agreement was to cover the R66m (later R91m) in union provident funds that had started flowing to Canyon Springs two years earlier.
Long delay
Although this report was handed to the FSB in October 2009, it appears that no immediate action was taken. The delay allowed Trilinear to lose another R150m of clients' money. Only in November 2011, in light of an independent inquiry, did the FSB withdraw Trilinear's licence.
The FSB and Tshidi denied that they had breached any duty of care or that they owed obligations to the PEPF which gave rise to civil liability. They also denied that they acted with gross negligence or that a "causal link exists between any of the omissions and the alleged losses".
The "guiding force" at Trilinear, they said, was chairman Sam Buthelezi. Working with him was Richard Kawie, purportedly the Sactwu national benefits coordinator. Kawie, they added, was a PEPF trustee or alternate trustee.
As such, the FSB stated, Kawie was obliged to act with due care and in good faith "and to disclose any facts and circumstances known to him which gave rise to or may give rise" to interest conflicts. Instead, he hadn't disclosed to his fellow PEPF trustees that he exercised effective control over all Canyon Springs decisions and that he had recommended the Trilinear investment because he expected "personal financial gain".
In summary
It thus seems clear that: 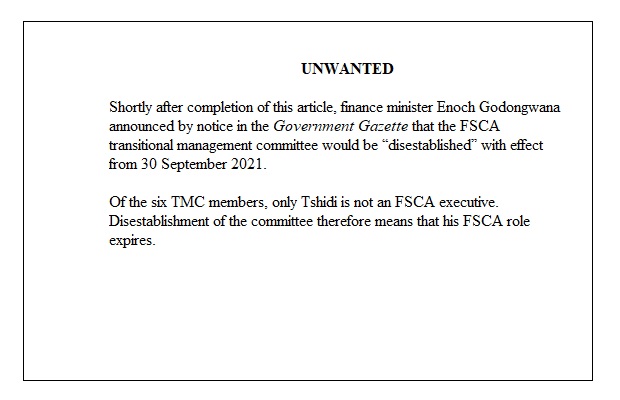 Allan Greenblo is editorial director of Today's Trustee (www.totrust.co.za), a quarterly publication mainly for the principal officers and trustees of retirement funds.