Deal activity during 2020 was quite unlike any other tracked by DealMakers. In a nutshell the experience of businesses globally during the COVID-19 pandemic was governed by the ability to embrace the digital revolution to advantage and to adapt to unusual ways of communicating with clients, suppliers and stakeholders. In many instances this adaptability determined the survival of many operations. Mergers and acquisitions occur under many circumstances, and as such the pause in M&A activity in the first few months of 2020 slowly abated during the course of the year.

Advisory teams found themselves operating in a changed environment - one that brought significant complexity to deals - transacting parties who were halfway through acquisitions or disposals had to deal with challenging regulatory and other delays; lockdown conditions limited the ability to conduct due diligence investigations; and complications arose in terms of valuing and pricing business enterprises and assets.

There was also an increase in post-M&A disputes, where deals delivered below expectations, with some potential buyers relying on material adverse change clauses to exit transactions. To this point, 11 additional deals announced during 2019, but which were yet to close in 2020, were terminated, pushing up the number of failed deals for 2019 to 30 - a number topped only by the 44 failed deals in 2008.

Not surprising then that deal values of R336,96 billion last year were down almost 40% and deal activity down 20% for the year at 393 deals, off an already low base. Having said this, the fact that sizeable and complex deals and transactions were announced at all, is testament to hard work and perseverance by the teams of people who drive this industry. 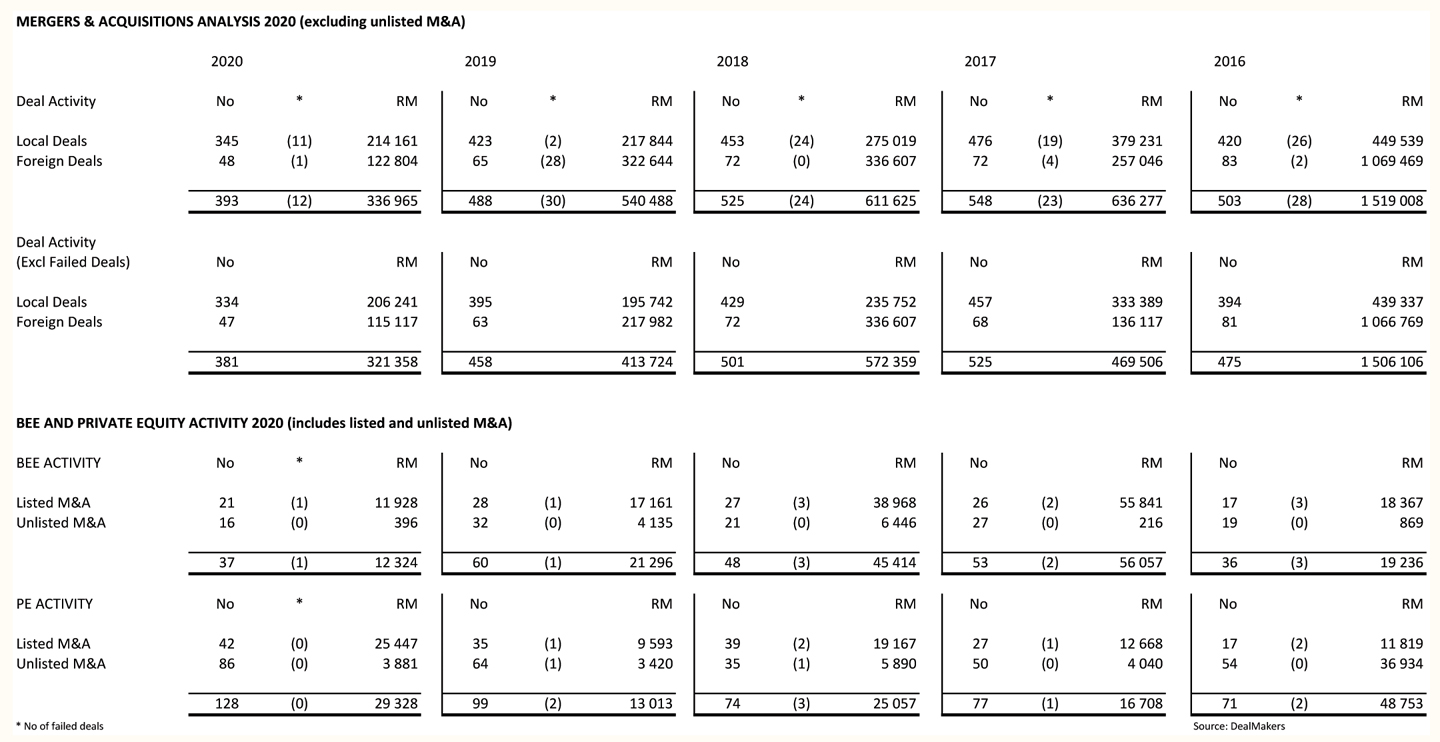 General Corporate Finance transactions during 2020 reflected a country in lockdown with companies active in capital raising to shore up balance sheets. Companies looked to their advisers who had to manage and leverage entrenched relationships with institutions to provide much needed capital. Those corporates in the fortunate position of having extra cash took advantage of the drop in share prices to repurchase own shares at significantly discounted levels. Restructurings and unbundling of assets aimed to add value to shareholders while only those companies confident of market support, such as Ninety One and Bytes Technology, proceeded with local and secondary inward listings.

Earlier this week DealMakers held its first virtual Ansarada DealMakers Annual Gala Awards to celebrate the achievement of the advisory firms within the M&A industry during 2020. The Event Sponsors were Ansarada, Sibanye-Stillwater, Brunswick, INCE, Exxaro, A2X and Mail & Guardian.

The winners of the awards are as follows:

Should you wish to view the event, you can do so here.

Advisory firms rankings (below) by DealMakers of M&A activity by the top South African advisory firms (in relation to exchange-listed companies) for 2020. 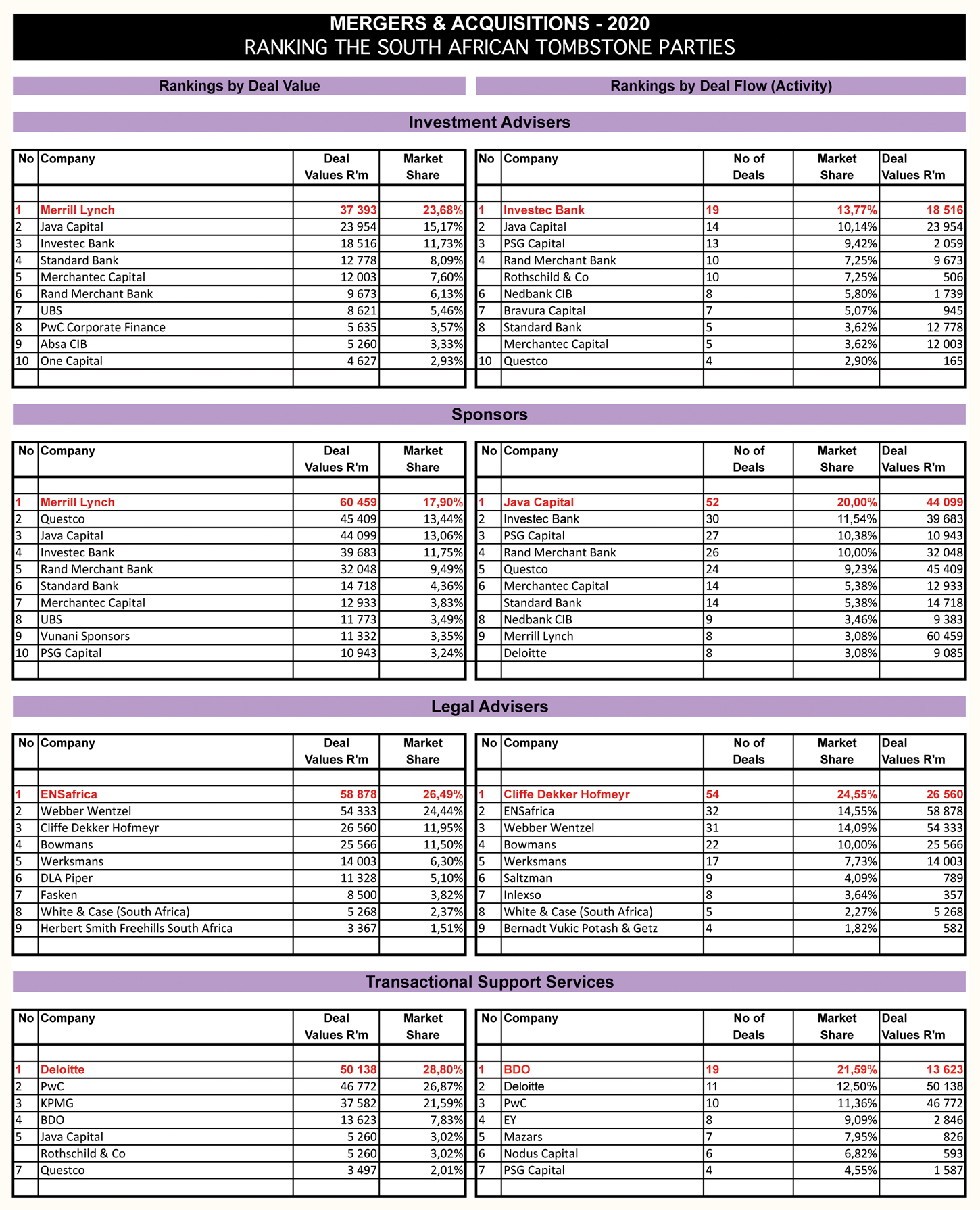 Advisory firms ranking in activities of general corporate finance for 2020 are as follows: 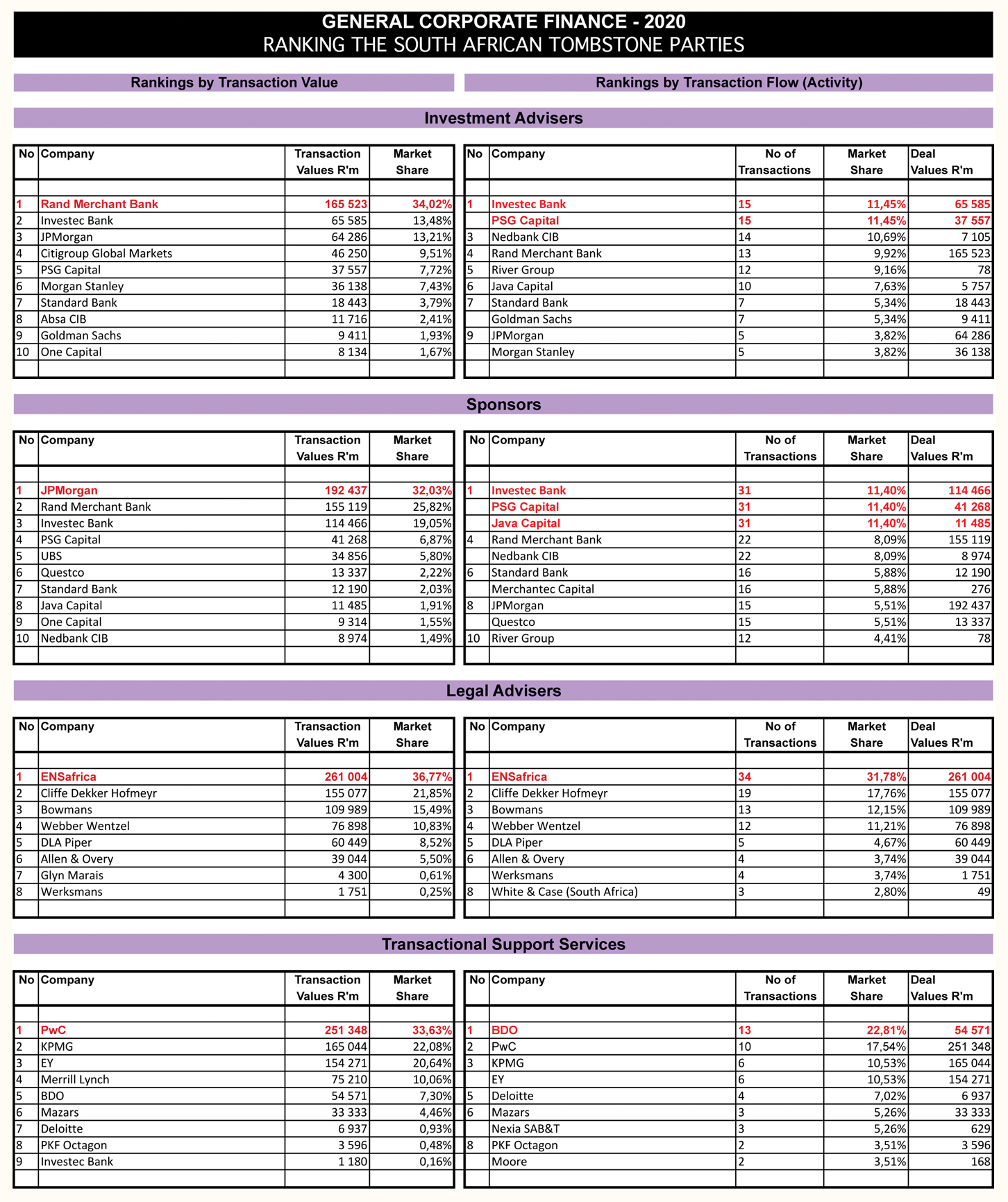