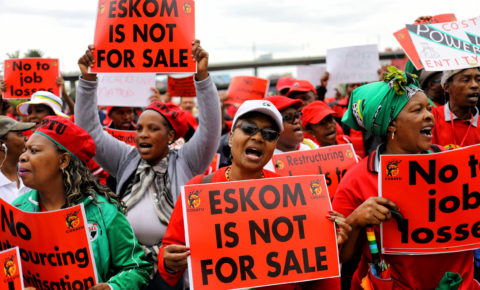 The language of rating agencies is often obscure; publicly Moody's talks about 'persistent structural challenges' and the risk of 'fiscal slippages in the face of both slower growth and increasing political pressures'. What this means is that they are looking for some substantial and fast policy changes, probably larger than SA's political system can manage.

The ANC has slightly belatedly released its list of parliamentary candidates. What does the list tell us about the ANC's economic policy agenda? Depressingly, not much.

The SA economy has underperformed dramatically over the past decade, trailing not only average GDP growth of developing countries, but also average global growth. From 2o14, it has even trailed average of the normally slower developed countries' growth. It's even trailed its own post-apartheid history until 2008. So, you might expect the party would treat this issue as an absolutely vital priority, and it would tailor its candidate list to include new thinkers, new candidates who would be in a position to vitalise President Cyril Ramaphosa's New Dawn promise.

Turns out, not so much. The list, in fact, reflects the opposite: A dramatic and emphatic lack of change.

In some ways, this is unsurprising. Parliament is not where ANC economic policy is actually formulated, although where it actually is formulated is something of a riddle in itself. Political analysts say the party has struggled to create anything the looks like an overarching policy agenda, partly because unanimity within the party on economic policy doesn't really exist, so it is difficult to discuss in any real way.

The party does focus on what might be termed economic policy hot-points, and in the current election campaign, the independence of the Reserve Bank might be described as one of those "issue-based" points. The party also generates rallying cries, like "radical economic transformation". But as for unpacking what that actually means in practice, and despite that, the electorate is a bit in the dark.

The construction of the list does leave some clues, however, and few of them are good. First, it demonstrates just how hierarchical the ANC is as an organisation.

The graphic illustration is the inclusion of Environmental Affairs Minister Nomvula Mokonyane, who, according to a witness speaking under oath at a government commission of inquiry, received piles of gifts, including R50,000 a month, for 14 years, from a private company doing business with the government.

If true, she effectively lied to Parliament every year by not declaring the gifts as the Executive Members Ethics Act stipulates. She appears, incredibly, at number 10 on the list, 12 places higher than Finance Minister Tito Mboweni.

There is also a host of other questionable candidates, including Minister in the Presidency Bathabile Dlamini and former finance minister Malusi Gigaba. Gigaba, who lied to a court and who, it emerged, told Denel CEO Riaz Saloojee to "look after the Guptas", appears on the list just one place below Mboweni.

A host of political commentators have pointed out the obvious hypocrisy from an ethical standpoint, but the reappearance of these candidates suggests something else, too, from an economic point of view: A kind of gravitational, institutional inertia within the party. According to one analyst, the ANC is an extremely hierarchical organisation despite its avowedly democratic, socialist outlook.

The nature of the list will crimp the ability of President Cyril Ramaphosa to make dramatic changes. The vast majority of Ramaphosa's Cabinet has to come from Parliament and he will also be constrained not only by this limited choice, but by a potentially critical parliamentary caucus which proved such an impediment to former President Jacob Zuma in his later years in office.

But he is also constrained by the economic resolutions of ANC conferences, and the traditions of continuity within the ANC itself. Without a grand vision of change within the caucus or the National Executive Committee, his hands are somewhat tied.

Wits School of Governance professor Susan Booysen says the ANC candidate list is something of a "copy and paste" exercise from the ANC's National Executive Committee, selected at its 2017 elective conference. Ramaphosa won the leadership battle by a mere 179 votes, suggesting the candidate list effectively incorporates the battles of the Nasrec conference into the body of Parliament.

Although he plays from a limited deck, Ramaphosa does, however, have some powerful cards in his hand. The very dissolute character of ANC economic policy provides him with leadership opportunities. He has already demonstrated one in re-emphasising the need for investment, hosting an important investment conference. His personal familiarity with business and its characters means he may be able to draw on a broader range of expertise. According to insiders, Cabinet meetings have already changed dramatically -- focus on details of policy is back.

He also has one less headache than his predecessors. Trade union federation Cosatu provided a kind of base of attack for radicals within the party, yet it's remarkable how few members of the trade union movement appear on the list compared with previous parliamentary lists. Even former Cosatu trade unionist and current Minister of Economic Development Ebrahim Patel is amazingly low on the list, coming in at 137 on the national list, which means he will probably be elected, but only just.

Ramaphosa's other advantage is the very precariousness of SA's economic position. SA's national debt, which just recently increased to R3-trillion, is perilously close to being designated "junk" by all three major debt rating agencies. SA hangs on to a split rating by its fingernails, since Moodys remains the hold-out.

President's problem is that Moody's and the other rating agencies are likely looking for changes larger than SA's political system can deliver. The language of rating agencies is often obscure; publicly Moody's talks about "persistent structural challenges" and the risk of "fiscal slippages in the face of both slower growth and increasing political pressures".

What this means in practice is that they are looking for some substantial and fast policy changes.

But Lumkile Mondi, senior lecturer at the Wits School of Economics and Business Science, says:

"I just don't see them changing. We are all looking for green shoots on the tree, but the leaves are dry". DM