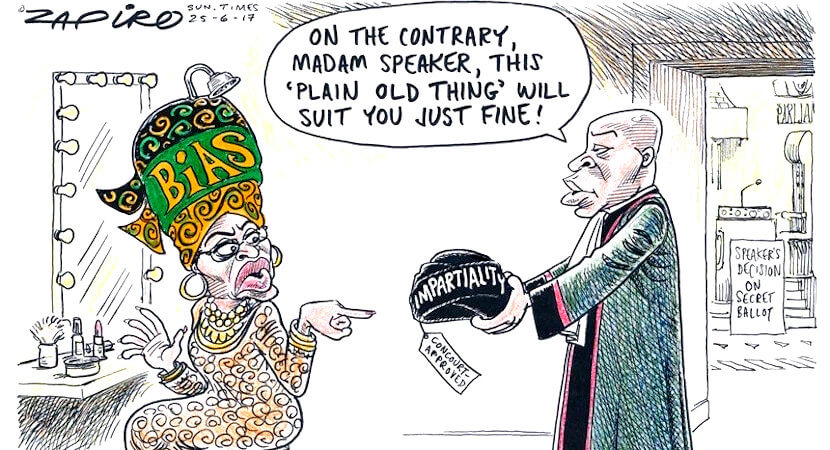 CAPE TOWN -- Putting aside all debate on ethics and conscience, the tactics behind postures that opposition parties have taken regarding early elections after a successful No Confidence vote are revealing. Only the DA wants early elections, confident it seems, that it will win itself either a hugely influential ruling pact with the ANC or that, together with other opposition parties, force regime change. The EFF and UDM are reticent, citing strategy and pragmatism. The EFF, who'd prefer to cosy up to an ideologically closer party, says pushing for an early election will alienate potential vote-swinging ANC MPs. If enough fence-sitting ANC MPs turn against Msholozi, full elections could shift their bums off comfy parliamentary benches. The UDM cites the questionable capacity of the Independent Electoral Commission confronted with sudden mammoth logistics. If Zuma and his cabinet have to walk, Parliament has 30 days to elect a new president (who then appoints his or her cabinet). Speaker Baleka Mbete automatically becomes Caretaker President. As for ethics and conscience? Consider Advocate Paul Hoffman's 3X3 advice to ANC MPs; Respect yourself, restore your dignity, reject corruption. Reinforce integrity, require accountability, rubbish impunity. Then; Rejoice in zero-tolerance of corrupt acts, rejuvenate your party and, Replace your President. One could add; Your epitaph will proclaim your vote... - Chris Bateman

Cape Town - Opposition parties have united in recent weeks in calling for President Jacob Zuma to be removed, but appear divided on what should happen if the motion of no confidence against him succeeds.

The Democratic Alliance in Parliament on Tuesday said it would be better for the country to hold early elections if Zuma is voted out of power during the motion on August 8.

DA chief whip John Steenhuisen said that party leader Mmusi Maimane had been on record that the DA would prefer early elections if Zuma and his Cabinet are ousted.

"What South Africa has is not [just] a Jacob Zuma problem, it is an ANC problem," Steenhuisen said quoting Maimane.

"It would be better for the country to go to the polls and elect a new government through fresh elections [were the motion successful]."

However, the Economic Freedom Fighters and United Democratic Movement disagree on holding early elections, with some party insiders arguing it "complicates and antagonises" ANC MP's considering supporting the motion.

News24 understands that opposition party leaders have been holding talks with ANC MPs, promising them that the motion is not an attempt to remove the ANC as a governing party, only Zuma.

Read also: Gigaba heaps scorn on chances of a No Confidence vote succeeding

One source said some of the MPs wanted reassurance that the vote of no confidence was not an attempt at "regime change", as a condition for supporting the opposition's motion.

Opposition party leaders have been wooing ANC MP's to support the motion. They need at least 50 votes from ANC MPs for the motion to pass.

EFF spokesperson Mbuyiseni Ndlozi said that holding early elections means not only voting for a new president, but also replacing the current Parliament.

"The DA is yet again proving its incapacity to appreciate what our Constitution is about," Ndlozi told News24 on Tuesday.

"The removal of a president is no constitutional basis for the dissolution of Parliament. So, therefore, they are being constitutionally unintelligent."

Ndlozi said the point of the motion is to prove that South Africa's democracy can move on without individuals who have been corrupted as heads of government.

"The ANC won the 2014 elections. That's the constitutional definition of who won. It's a political party that wins, so they have the majority."

MPs should, therefore, vote in a new president from the current fifth Parliament, he said.

The EFF has already indicated that it is ready to interdict the August 8 debate if Mbete announces an open motion of no confidence, and would seek an urgent interdict against that motion on the basis that it must be via secret ballot.

"There's no need for fresh elections. The Independent Electoral Commission is not ready for that. They are still battling with addresses for voter registration. They have said they also need R300m.

"They depend on the ANC government to get that R300m, so that would just be an exercise in futility. It won't work."

It would have worked if the IEC systems were ready and they had a budget, he said.

Holomisa also said that Zuma should be removed, but they were not in the game of changing the regime before elections.

"We said Zuma must go, so obviously the ANC will continue to 2019. We are not contesting that.

"All we are interested in is for Zuma to leave because he has violated the oath of office."

Ousting Zuma was Parliament and democracy's turn to test itself going forward, and allow the current fifth Parliament to finish its mandate strongly, he said.

'SA ripe and ready for change'

Steenhuisen was confident that regardless of what happens next week, the opposition has been brought closer together by the ANC.

"I think the opposition has never been more united. The one thing the ANC has been successful in doing is uniting the opposition and civil society against them.

"I think South Africa is ripe and ready for change, no matter what the outcome of next week's debate.

He said the opposition parties had shown they could achieve much by working together, and by advancing core principles, despite differing ideologies.

According to the Constitution, the current President can only dissolve the National Assembly before the expiry of its term if:

- the Assembly has adopted a resolution to dissolve by a majority vote, and three years have passed since the Assembly was elected.

An acting president can only dissolve the National Assembly if:

- there is a vacancy in the office of President, and the Assembly fails to elect a new President within 30 days after the vacancy occurred.