Covid is a crisis not to be missed for introduction of fundamental social and economic changes that will avert worse crises later. Provocative arguments are presented.

Perceived curses can be disguised blessings. In terms of the disruptions and deaths it has caused, Covid-19 is surely an unmitigated curse.
Not so, argues Oxford economist Ian Goldin. His thesis in Rescue is that the pandemic has created an "inflection point" to turn the world from calamities that the pre-pandemic trajectory would have made inevitable: increased inequalities, environmental desecration and other cataclysms "tearing our societies apart". Desperately needed is a "radical change in direction" that promotes equity and sustainability.
So radical is the recommended change that it equates to, and draws inspiration from, the restructures of Europe that followed the Second World War. So potent was the popular mood for such slaughter to be averted in the future that a new era of international cooperation was born. Bretton Woods and the Marshall Plan were amongst worldwide initiatives that fed decades of unprecedented prosperity.
Extreme behaviour
Then it began to fall apart as the "we" became increasingly overtaken by the "me". The Reagan and Thatcher revolutions, respectively in the US and UK, were exemplified by the slashing of tax rates that exacerbated class divisions and weakened welfare systems.
Globally, Goldin points out, today the world's 20 richest billionaires have more wealth than four billion people (half the world's population). The pandemic has been a boon for the ultra-rich, he contends, because of tax-relief measures and stock-market surges. The disparities are accentuated by the scale of wage reductions and job losses.
Goldin, a product of UCT, is a former chief executive of the Development Bank SA and vice president of the World Bank. Now the professor of globalisation and development at Oxford University, where he leads a programme on the future of work, his writing is as lucid as his research is meticulous. They make his arguments easier to read than refute.
"The impact of the pandemic will persist long after the health emergency itself has passed," Golding predicts. "Higher levels of unemployment, inequality and debt reduction will leave permanent generational and geographical scars, with many countries failing to achieve their pre-pandemic levels of economic output for years to come."
Once they do eventually return to these levels, their composition will be different. The impact of changing trade patterns, automation, demographic shifts and productivity will constrain growth. They'll also reinforce the divides that the pandemic has revealed.
He considers nightmarish the possibility of returning to the purported normalcy of the pre-Covid period because it will worsen every intricate societal division, regionally and internationally.
On the contrary, insists Goldin: "If the pandemic accelerates improvements in governments and their ability to build cohesion within their societies globally, it will have provided a vital building block for a better world."
What placed us on the road to ruin? He asserts that causes can be found in the current dominant economic model based on 40 years of neoliberalism. It generated growing inequality, extreme poverty and ecological breakdown.
What's needed to reverse it? Higher and more redistributive taxes; smarter governments that invest more in education, infrastructure and industry; more Nordic-like policies domestically, more burden-sharing and cooperation internationally.
These solutions, he contends, might have been written off last year as idealistic. This year they've become mainstream. The pandemic has opened a window of opportunity for the rescue of humanity:
• Covid has altered people's views on what's possible and necessary. Their priorities concerning careers, education, family and community have changed, as has public perception of government actions;

• Social solidarity has been natured. There've been outpourings of volunteerism and opposition to unbridled market forces;

• Governments have been unchained from self-imposed limits previously applied e.g. central banks have used their balance sheets to finance the costs of the pandemic. Even the IMF is starting to sound more like a development agency.
So how do we get from the old mainstream to the new?
Interviewed by former finance minister Trevor Manuel on a platform that the Gordon Institute of Business Science provided, Goldin anticipates "coalitions for change". Civil society will coalesce in communities, regions and institutions - including stakeholder as opposed to shareholder primacy - that will lead governments as they did post-WW2.
Now, as then, it's accepted as wrong that the younger generation be disproportionately burdened by sacrifice for the sake of the older. Now, for example, there've been sacrifices in social interactions and education; then, it was in the lives of soldiers and foregone youth.
Wake-up call
The pandemic has shown that it is much less costly to avoid a crisis than respond to one that is raging, Goldin writes: "In just one day in 2020 governments spent more responding to the pandemic than they had in 10 years on pandemic prevention."
The facts are that a pandemic was inevitable and that we failed to prevent or prepare for it. This is surely as loud a wake-up call as can be sounded, he insists.
If the call is finally heard, Goldin contends, "Covid-19 can rescue humanity and provide a portal to a better future. Whether we now commit to a new and improved world, or remain set in our dangerous ways, is the historic choice confronting us. The stakes have never been higher."
Covid has produced the historical turning point from which humanity can be rescued from catastrophe. The global crisis that can only be settled by global accord. The choice is in reacting to the pandemic as a curse or activating it as a blessing.
'Rescue: From Global Crisis to a Better World' by Ian Goldin (Hodder & Stoughton, 321pp; R405).
Allan Greenblo is editorial director of Today's Trustee (www.totrust.co.za), a quarterly publication mainly for principal officers and trustees of retirement funds. 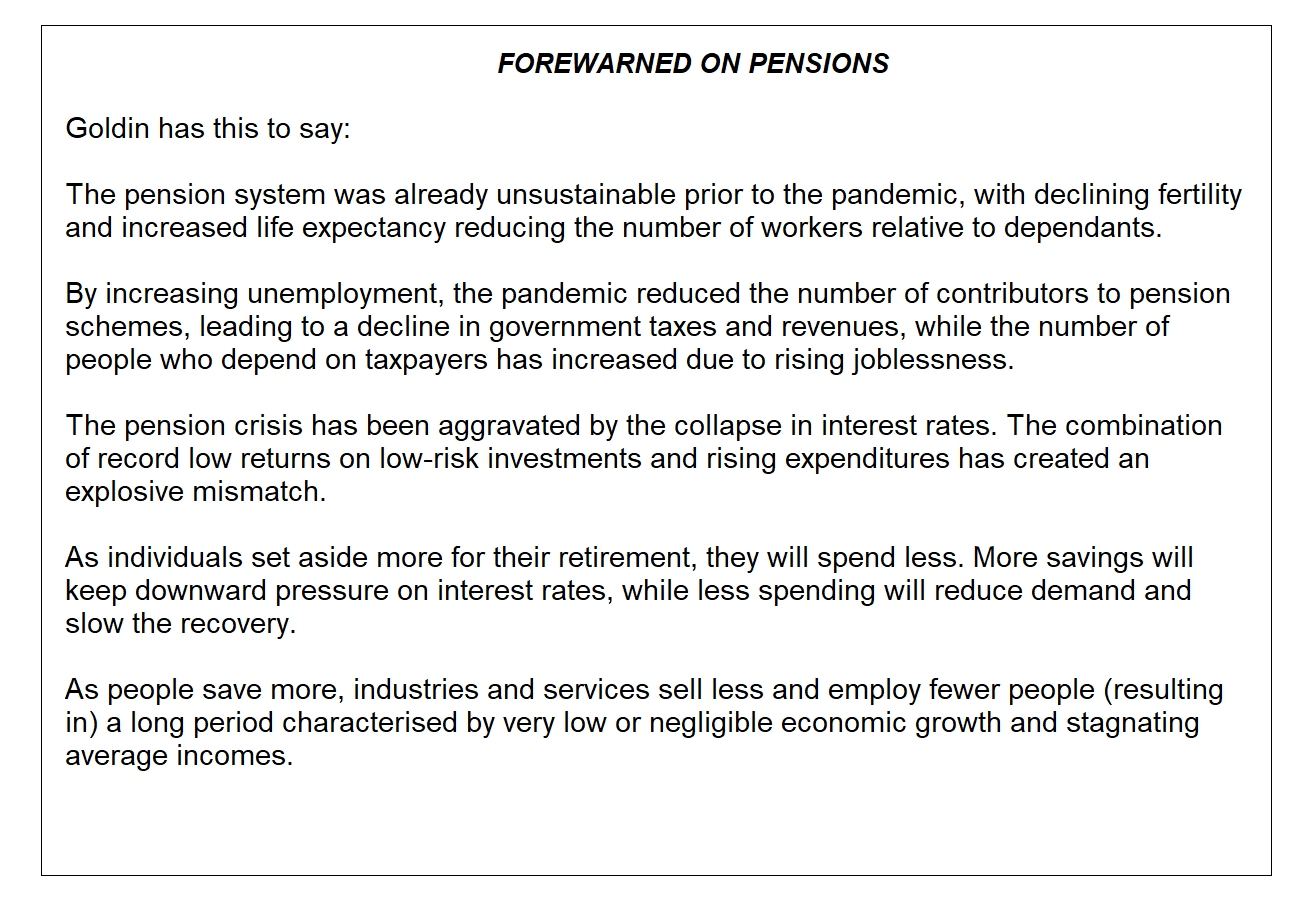