News Home / News / Trump and Macron planted a tree — but where did it go?

Trump and Macron planted a tree — but where did it go?

Trump and Macron planted a tree — but where did it go? 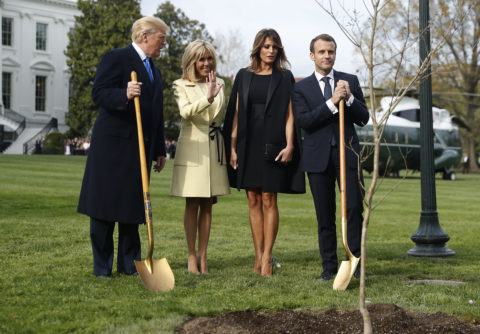 The photograph was seen around the world: US President Donald Trump and France's Emmanuel Macron, gilded spades in hand, shovelling dirt over a young sapling.

A week ago, at the beginning of Macron's visit to Washington, the French president joined his American counterpart to throw handfuls of soil on the roots of a young oak tree as their respective first ladies looked on

It was a symbolic gesture: the tree came from a northern French forest where 2,000 US Marines died during the First World War.

But a few days later, the plant was nowhere to be seen.

Amid fervent speculation, France on Sunday came through with an explanation: the tree, now not just a plant but a symbol of US-French relations, had been placed in quarantine.

"It is a quarantine which is mandatory for any living organism imported into the US," Gerard Araud, French ambassador to America, wrote on Twitter.

"It will be replanted afterwards."

When a follower fired back that the caution seemed a bit late -- given that the tree had already been planted -- the diplomat went on to confirm that the roots had been enclosed in plastic. DM